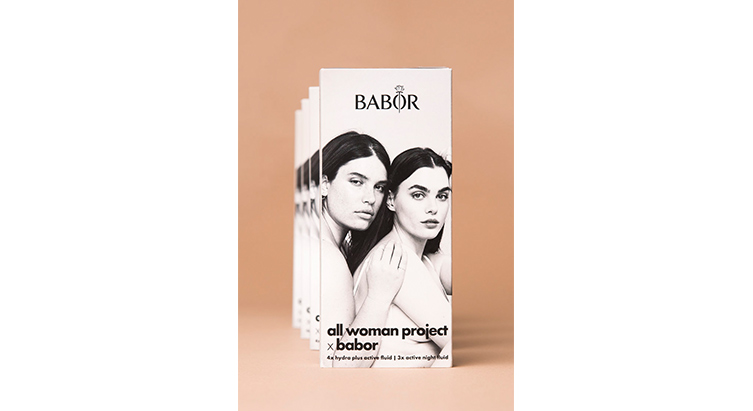 Babor Partners with All Woman Project to Promote Empowerment
The initiative is being supported through the release of a limited-edition beauty set, and an unretouched photo and video creative awareness campaign.

Luxury skin care brand Babor has kicked off its first-ever North American collaboration by unveiling a partnership with All Woman Project (AWP), a nonprofit organization dedicated to helping females feel confident about themselves through unretouched photo and video campaigns. The initiative is being supported through the release of a limited-edition AWPxBABO Beauty Ampoule Set, and a creative awareness campaign, which was revealed Thursday night in NYC at an interactive cocktail event featuring the founders of AWP, Babor’s executive team, and AWPxBABOR’s campaign models.

“This is the fifth campaign for AWP, and the first beauty one. We started two years ago when Charli [Howard] and I noticed there was no way she and I could be represented together in the same ad campaign, as well as women of different ages and ethnicities, so we decided to make it happen,” said Clementine Desseaux, co-founder, AWP, referring to why the organization was created. “As you know, beauty campaigns are never not retouched, and everything feels unattainable. In our campaign we have amazing women who represent beauty in all shapes, colors, sizes, and ages without photoshop.”

As part of the campaign, a nearly 60-second video was produced and features close-range shots of the women as they discuss what makes them feel beautiful and empowered while applying fluids from the AWPxBABO limited-edition Beauty Ampoule Set, available for $40 on awpxbabor.com. The seven-piece set includes four Hydra Plus Active Fluid Ampoules for Dry Skin, meant to supply intensive hydration in the daytime, and three active night fluid ampoules designed to work best during the deep-sleep phase to help promote a more rejuvenated appearance. Fifty percent of sales from the collaborative Beauty Ampoule Set will go to AWP.

“I’m here with my colleague and boss [Tim Waller, President, Babor North America] as two men overseeing this collaboration with the All Woman Project. As a brand and as men we hear you, see you, cheer for you, we will fight for you and we really celebrate you not only tonight, but every day,” said Benjamin Simpson, SVP of Marketing, Bbabor, at the event. “The timing of this collaboration was not planned, and I believe now more than ever we are seeing something in the world that is way overdue, and we’re filled with joy to be a part of this.”