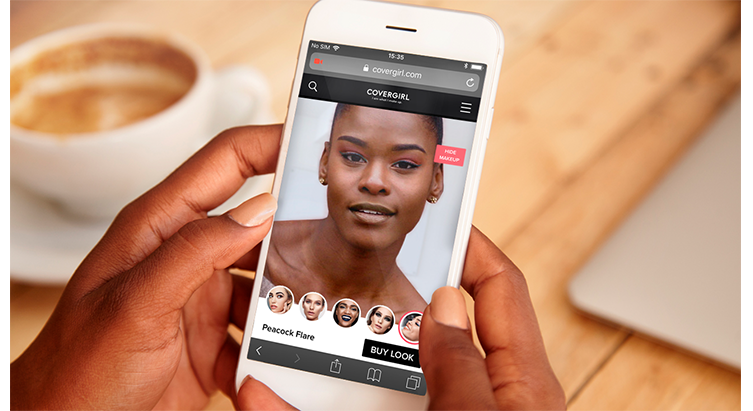 Coty has unveiled a new augmented reality try-and-buy experience where users can virtually “wear” five spring 2018 makeup looks from CoverGirl, and then click to buy a look by linking directly to the assortment on Walmart.com.

The mobile-web experience, available at covergirl.com/tryit, was first announced at WWD’s Digital Beauty Summit, Wednesday, February 7. Jason Forbes, Chief Digital & Media Officer, said that, “As a challenger in beauty, our goal is finding better ways to meet unmet shopper needs. Virtually trying on complete trending looks, without having to download an app or go to a store, are great examples of this. We’re excited to partner with Walmart on this initiative, giving online shoppers a specific and seamless path to purchase their favorite COVERGIRL beauty looks.”

Coty also just reported second quarter results, with net revenue of $2.63 billion, an increase of 14.8 percent. Excluding the positive contributions from the acquisitions of Younique, Burberry and two months of ghd, organic net revenue increased 2.8 percent on a constant currency basis, driven by strong growth in luxury and sustained momentum in professional beauty. Gains were partially offset by a modest decline in consumer beauty.Reported operating income of $174.4 million increased from a loss of $12.7 million. Reported net income of $109.2 million increased from $46.8 million.

A further analysis of Coty’s divisions showed that Luxury reported net revenues of $951.2 million, an increase of 13.9 percent compared to the prior year, and a 9.1 percent gain on a constant currency basis. The increase in constant currency reflects 8.1 percent growth in the underlying business driven by the on-going success of the debut Tiffany & Co. and Gucci Bloom fragrance launches, as well as growth in Chloe, and a 1 percent contribution from Burberry.

Consumer Beauty saw net revenues of $1.13 billion, an increase of 13.7 percent compared to the prior year, and a 9.8 percent jump on a constant currency basis. The increase in constant currency reflects an 11.1 percent contribution from Younique and a 1.3 percent decline in the underlying business. The modest decline was driven by certain U.S. focused brands, largely offset by strong growth in Wella Retail, Max Factor and Monange.

Professional saw net revenues of $547.8 million, a jump of 19.1 percent, compared to the prior year, and a 13.6 percent jump on a constant currency basis. The increase in constant currency reflects an 11.6 percent contribution from ghd and 2 percent growth in the underlying business, driven by strength in OPI globally.

CEW’s Beauty Creators Awards are Friday, November 11, and everyone who comes will ...
Scroll Up