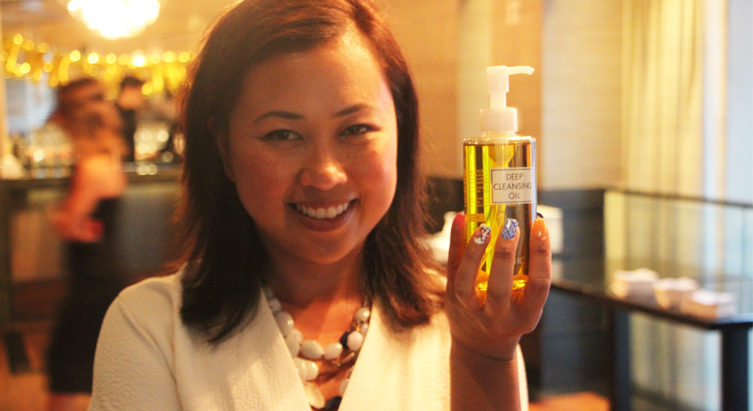 DHC: The Biggest Brand You Likely Haven’t Heard Of and May Never Get to Know in the US
Presently, DHC has more than 500 stores globally with more than 70,000 stores carrying their products. Though you can find their skin care items at Dermstore.com; Amazon.com; their own site, DHCcare.com; not to mention several niche Asian markets and some Urban Outfitters stores, the global company still hovers under consumers’ radars in the US.

Playing off their Japanese heritage, leading direct mail skin care company, Daigaku Honyaku Center [DHC], hosted a press event Oct. 8, setting up four product stations within Koi Soho to highlight bestsellers and new releases. There was also a photo booth, a nail station and an eyeliner/brow bar to engage editors. Koi’s famous sushi disappeared moments after being placed on a table; bloggers snapped selfies, admired the new products, waited on line to have their treatments and appeared to have a terrific time.

And if you’ve not heard of DHC, you’re not alone. The press event, in many ways, served as a way to introduce the brand.

Presently, DHC has more than 500 stores globally with more than 70,000 stores carrying their products. Though you can find their skin care items at Dermstore.com; Amazon.com; their own site, DHCcare.com; not to mention several niche Asian markets and some Urban Outfitters stores, the global company still hovers under consumers’ radars in the US.

“We were in Sephora years and years ago, before they had their big restructuring, and soon after, the relationship dissolved,” said Miles Perdiguerra, DHC’s US Marketing Director. “They are very makeup and fragrance focused now. Cracking the Western market is hard. We would love to find a retail partner that’s interested in skin care, which is our main focus.”

When taking a closer look at the forward-thinking company, there may be some non-traditional skin care elements in its brand DNA that could be holding it back from penetrating the US market.

One could be the company’s origins. Established in 1972 as a translation company, Mr. Yoshiaki Yoshida, DHC’s owner, wanted to create a lifestyle brand. Seeing that there was no direct mail industry, he decided to start one with only three beauty products, each rooted in nothing other Spanish virgin olive oil.

“When the oil comes to Japan,” Miles explained, “it goes through additional purification processes to refine it and take out anything that might clog pores.” And though it sounds strange to know the oil originates in Spain, it’s been incredibly successful for the company. According to Miles, Deep Cleansing Oil, their most popular product, sells a unit every 10 seconds globally, and their makeup remover leads the category on Amazon.

While headquartered in Japan, the company opened offices in San Francisco in 1995. Two years later they launched their mail order business here. The move, for some, begged the question: for a technologically-forward company, isn’t direct mail an antiquated model?

“We have a very loyal customer base, many who have stayed with us since we started here,” Miles said. “We do monthly catalog mailings and we prospect with catalogs as well, which is how we acquire new customers.” Mailing-list names are attained though mail co-ops. People whose profile fits DHC’s existing customers receive a prospect catalog with affixed samples, which are tried on at home rather than in stores. Another successful marketing strategy, added Miles.

Since technology is a huge component for the company, they often use ingredients that aren’t typically used in Western beauty, such as Asai Germanium and Astaxanthin, an antioxidant that’s derived from freshwater green algae, believed to have 6,000 times the potency than vitamin C.

“We use many unique and unusual ingredients you won’t find in the US market, which might be why retail stores haven’t been ready for us,” she explained. “The formulations take some explanation. But once people learn what the products can do, many are fascinated at the potential of new techniques to fight the age-old war against aging skin. It’s been DHC’s philosophy to either greatly improve upon what’s available on the market or introduce different products entirely.”

Products that do make their way here are heavily vetted by staffers in the San Francisco office a year or so after they’ve been released in Japan.

“We have a team that takes them home and evaluates their function, form, how they feel and smell, what purpose they will fill.” she said. “We want to introduce people to items that don’t exist in other products. We do our own research to see if there’s a niche that can be filled and if there is, we decide to bring it over.”

Then there’s DHC’s packaging and design. Handled in Japan, and largely created for direct mail, DHC intentionally creates variety by offering different logos, color schemes, bottle shapes and fonts so items stand out on a page and aren’t confused with the vast number of other products the company offers.

“When you are looking through a catalog you want a singular product that will jump out at you. Retail looks for something more consistent,” Miles admitted, though a characteristic that may raise a red flag with some retailers.

Finally, building a US store is a bit of a hurdle.

“We would like to partner with a store rather than make the investment ourselves and build a store. The US is a massive country, and I know that sounds crazy when you look at China, for example, which is where we have a number of our own stores, but here it’s more diverse in terms of the type of women that buy skin care,” she explained. “New York might be the beauty capital of the US but it’s not the only major city. When you look at trying to address this market, you really need a strategy for New York, Los Angeles and Chicago, among others. In the UK we’re growing our business quite rapidly because it’s all about London, which establishes our foundation and retail in one centralized place.”

“Our company is a little quirky, a little unpredictable and full of surprises. We keep people guessing. Sometimes the US market isn’t always ready for that,” Miles said. “It’s our job as the American marketing team to let American women know that we’re cutting edge, that we bring beneficial ingredients and technologies with Asian botanicals, and that we are visionary.”

Anastasia Soare created the brow category 25 years ago. It's why her company, ...
Scroll Up