DIY Dermatologist-Designed Device Looks to Treat Acne at Home
A new at-home device is using blue light therapy to target acne at its root—underneath the skin’s surface— and looks to prevent new spots from forming, too.

A new at-home device is using blue light therapy to target acne at its root—underneath the skin’s surface— and looks to prevent new spots from forming, too. 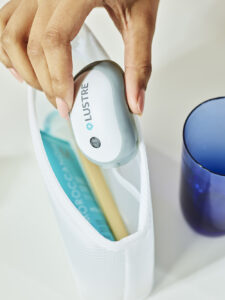 When it comes to acne, “while topicals work, they do not treat acne, at its root underneath the skin surface, where acne is born,” Isabelle said during the Zoom event. “And while drugs are effective, they also have serious side effects,” she added.

Dr. Karhade noted that early treatment of acne is important. “Acne leads to much scarring and significant psychosocial distress because of scarring,” she said. “All day long, I see patients suffering from their acne scars and looking for treatment, and it’s really hard at that point to say a lot of this could have been prevented by early treatment,” Dr. Karhade said. More than 80 percent of the world’s population is affected by acne at some point in life, so it’s a common affliction.

There are certain wavelengths of visible light that are used therapeutically. “One of those wavelengths is the 415nanometer- wavelength, which falls in the blue light category of visible light that’s been shown to activate a certain part of skin to kill bacteria,” Dr. Karhhade added. Her office offers photodynamic therapy that uses blue light to help kill bacteria, however the treatment isn’t accessible for many patients. “It requires coming into the doctor’s office; it requires applying something to the skin for about an hour and then sitting under the light for 15 to 20 minutes,” Dr. Karhade said.

Enter the Lustre ClearSkin device, which was designed to promote a natural skin response to produce protoporphyrin IX, which results in the destruction of p.acnes bacteria, Dr. Karhade explained. “Using the device can clear acne spots you have and it can also prevent new ones from forming,” Dr. Karhade noted.

Lustre ClearSkin is hands-free and portable and features a patented delivery system to provide the right amount of light, with the right intensity, for the right amount of time to optimize treatment results. Lustrestripes are disposable medical-grade adhesive strips that secure the device in place and will prevent the spread of bacteria while exfoliating the skin and opening pores.