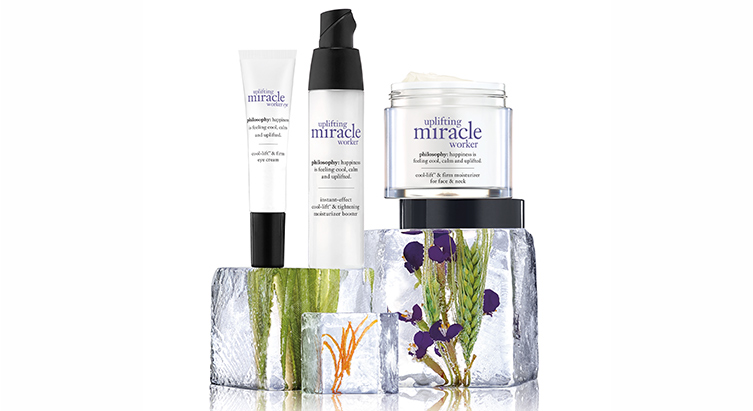 Ellen Pompeo: Aging is Cool
The actress is the face of a new campaign by philosophy aimed at redefining perceptions associated with aging.

Philosophy recently announced a collaboration with actress Ellen Pompeo. The 46-year-old star is the face of a campaign aimed at redefining perceptions associated with aging in celebration of the release of the brand’s new uplifting miracle worker skin care collection. As part of the initiative, women are invited to remove the anti in anti-aging and replace it with cool, and declare themselves or women they admire #CoolAgers on social media.

The campaign is a response to a recently released 25-year longitudinal study conducted by the University of Alberta, which revealed that the phenomenon known as the “mid-life crisis” is unfounded, and happiness actually improves consistently over time. To celebrate these findings, philosophy will launch original video content featuring Ellen portraying stereotypical roles that have historically defined middle age. View a video of Ellen sharing her thoughts on aging on set of the uplifting miracle worker video shoot.

“I am thrilled and proud to be partnering with a company who has two very important goals,” said Ellen in a statement. “To break down negative stereotypes that society has placed on women regarding their age and raise awareness and funding for women’s mental health issues.”

The videos will be housed on a newly formed website, CoolAger.com, which will also feature contributions by renowned authors who will provide content for women of all ages to envision their lives as uplifting, enlightened experiences instead of a series of chronological, planned events.

As part of the brand’s hope and grace initiative, philosophy will donate $10,000 to the Aviva Family and Children’s Services, a Los Angeles-based nonprofit organization that provides community mental health services and support to at-risk children and families. The charity was personally chosen by Ellen. To date, philosophy has granted 1.8 million dollars to 29 mental health organizations across the country.

A world leader in video commerce, QVC is pulling out all stops for ...
Scroll Up