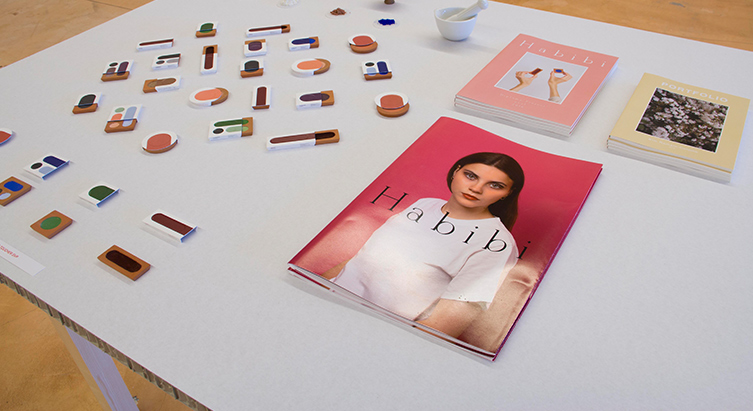 Paris-based Kim Ramain-Colomb, 26, was on a trip to Morocco when she discovered Berber lipstick, a traditional Moroccan makeup staple that is rich in color and pigment. Fascinated by what she said is one of the oldest makeup staples, she decided to create a modern take on traditional Berber make-up, and design items that could be incorporated into everyday life.

“In cosmetics, we are used to seeing a lot of plastic and glass, things that are very clean, smooth, shiny and offer transparency. We also like to directly see the product and color,” she said. “I was interested in working with something totally natural that told a story. The Berber lipstick, which is made of clay, was evident for me to work with because of its material. And it was important to work with something good for the environment.”

She named her line Habibi, which means my lover in Arabic and includes eye shadows, lipsticks, blushes and a mixed palette compact.

Habibi started as a school project, which she presented in June while attending École cantonale d’art de Lausanne, an art and design school in Switzerland. Though still in prototype, both the cosmetic and design industry are taking note.

A simple terracotta, paper-like packaging mimics whatever product and colors are found inside, which are mostly bold, and geometric in shape. A user merely swipes or slides the product to open it. Fans and critics are comparing the swiping style and design to smartphones, rather than cosmetics products. No brush or sponge is needed since a wet finger, dabbed across the makeup, is how it’s applied directly onto eyelids, lips and cheeks.

“I liked the idea of a compact object which slips into a pocket or in a bag and is ready to use at any moment of the day,” she said.

To create her line, Kim, who is self-taught and spent an enormous amount of time learning about the complexities of design and makeup, was interested in “experimenting with different shapes and [packaging] systems,” she said. “I also wanted to work with unusual materials for the lip, and a variety of colors of clay, such as black, white and sparkle.”

The pigment Kim uses is called Aker Fassi, a natural powder made from poppy and pomegranate seeds. The powders are made with natural ingredients, and crushed by hand in a mortar. For prototypes, Kim used pouring techniques of clay, and worked with an artisanal ceramist.

According to Kim, people like things that are authentic, environmentally friendly and offer a glimpse into understanding another culture, while offering a piece of history.

“Habibi seems to appeal to those who feel concerned about the Earth, have a sensibility about our history, and appreciates beautiful and traditional materials,” she added. “I think the desire to possess precious objects that are less disposable helps slow down this effect of overconsumption.”

Like her fan base, the industry has found her, mostly through her Instagram postings rather than the other way around. She has no website, though she is working on one, and any press she’s received has been through the media reaching out to her. Presently, Habibi is still an archetype, which means there’s no real product, pricing or distribution yet.

“Now that my diploma passed, I really want to develop and produce this project,” said Kim. “But I’m lost with all the regulations within the cosmetic industry. I’m also doing an internship at a beauty design office, which works with a big makeup brand, as I want to understand how cosmetic design works. I hope that [as word gets out about] Habibi, people will be tempted to help me in this challenge.”