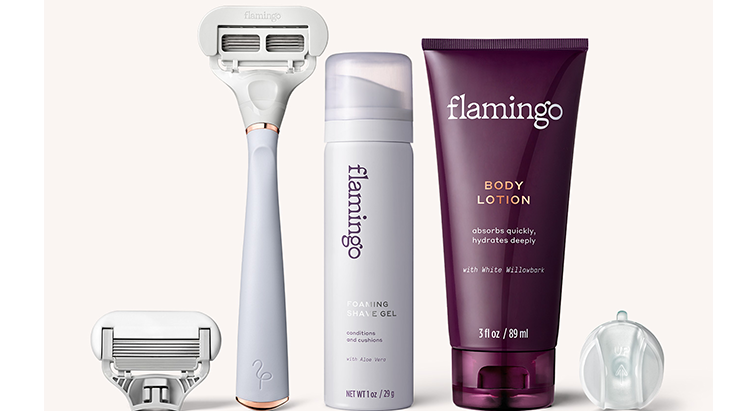 After conquering the men’s shaving market, direct-to-consumer brand Harry’s is taking on the $1 billion U.S. women’s shaving industry with the launch of Flamingo. According to the brand, since its 2013 launch, over a million women have used its products, so the creation of a line with products designed for women’s specific shaving needs was a natural extension.

Earlier this year, Harry’s received $112 million in new funding and shortly after, launched Harry’s Labs, an organization within the company to support entrepreneurs in building and scaling next-generation CPG brands. Flamingo is the first brand to emerge from the Labs umbrella.

Led by Allie Melnick, GM, and Brittania Boey, SVP of R&D and Design, two women who have been with Harry’s since the start-up first debuted, Flamingo features a suite of products sold à la carte, including razor handles and blades ($9), at-home body and face wax kits ($10), shave gel ($5) and body lotion ($9). An introductory shave set is also offered for $16. The brand says 99 percent of women use a razor, so it was determined to make the best possible one. To that end, the razor blazes in the line were engineered specifically for a woman’s curves and feature rounded edges and a flexible hinge, designed to work with the contours of the body. Noting that most women shave in the shower, the razor handles feature a weighted handle and textured rubber grip to decrease the likelihood of slippage in the shower. The two body care products offered were thoughtfully developed to offer a duality beyond their descriptions – the shave gel also moisturizes, and the body lotion exfoliates.

Similar to the Harry’s model, products are delivered directly to the consumer, however there is no subscription service option, as the brand discovered that women’s shaving behaviors vary on a number of factors including seasonality and lifestyle. Notably absent from the assortment is anything with pink coloring (razors come in lavender grey, mint green and coral), differentiating itself from competitors with a sleek and sophisticated design of minimalist hues.

To help its female consumers master hair removal, the brand will be creating guides that will be posted on its website and social media accounts. It’s also hoping to spark candid conversations around shaving and is committed to creating a judgement-free space, where nothing’s taboo.

There isn’t one particular topic that grabbed the attention of Beauty News readers ...
Scroll Up