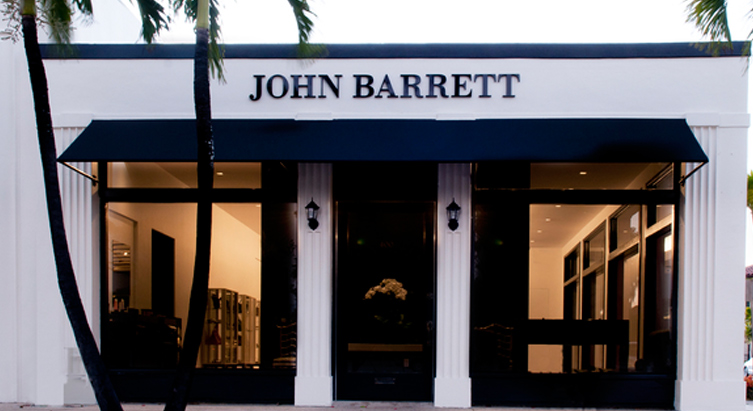 John Barrett To Transform the Luxury Salon Industry
John Barrett generates $2,700 per square foot, tallied 70,000 visits in 2014 and appeals to the top 5% of the Bergdorf Goodman demographic. The opportunity to deliver to this client merchandise that would compliment her lifestyle was for the taking, said James R. Hedges IV, CEO of John Barrett Holdings LLC.

John Barrett Holdings Inc. is on the road to growth and is looking to reinvent the luxe salon retail model along the way.

The high-end hairstylist, who’s operated an eponymous salon atop Bergdorf Goodman since 1996, will capitalize on his global, high-end customer base by opening up salons across the United States over the next several years, most specifically as the anchor salon for Saks Fifth Avenue and for certain retail real estate endeavors.

Once simply a customer of the salon, James R. Hedges IV saw an opportunity in expanding the business, so two years ago the former hedge funder and money manager invested in the company, became CEO at John Barrett Holdings LLC. and set out to transform the wildly successful salon into something of a mini empire. The impressive stats that drew Jim to the business include the fact that John Barrett generates $2,700 per square foot, and tallied 70,000 visits in 2014 appealing to the top 5% of the Bergdorf Goodman demographic. It’s the only salon in the world to sell the Tom Ford line of beauty products, and it accounts for 8.6% of global brand sales for luxe hair care line, Shu Uemura. Considering also that the John Barrett customer spends on average between 45 minutes and three hours per salon visit, Jim saw an opportunity to deliver to this person merchandise to compliment her lifestyle. Sealing the deal were conversations with beauty and fashion movers and shakers, including Leonard Lauder, John Demsey and Anna Wintour, who painted a picture that while the space created enormous commerce, it was also brand that was all about nurturing, kindness and respect in a very relaxed environment. Not exactly something one would expect from a luxury environment.

“I don’t have any beauty experience but I recognized the service he delivered and the opportunity to grow the brand,” Jim said, adding that John Barrett serves as Chairman and Creative Director of the company.

Jim subsequently identified several ways to grow the business, one of which was to expand its retail salon presence. In January 2015, the first John Barrett outside of New York appeared in Palm Beach. At 3,200 square feet, the location was designed by Daniel Romualdez, complete with spa treatment rooms, a gated courtyard, an Assouline library and a retail area filled with hard to find items, including vintage Hermes bags and Rolexes.

This month, a John Barrett location opened at 54 Bond Street in New York, measuring 2,200 square feet and featuring innovative services and products, exclusive collaborations and a curated selection of luxury merchandise suited to the Bond Street clientele. The location is in a landmark building, the former site of the Bouwerie Lane Theater.

“In brick and mortar retail only two things matter, feet in your store and the experience. If she is sitting in her salon chair staring at her phone or if she is engrossed in magazine we haven’t done our job. We want her engaged with things that help her life, that enriches her life,” Jim said.

This way of retailing at the salon level also transforms the revenue mix.

“A typical salon makes 10% to 15% profit if they’re great. In Palm Beach, we are running our revenues where 25% to 30% of sales are coming from retail sales. We sold 11 purses in three months at an average of $15,000. So if we change the experience for the customer and change the profit margins for the company then we’ve changed the luxury hair salon industry.”

In March 2016 a John Barrett salon is planned for the Westfield World Trade Center, which will serve as Condé Nast’s official in-house salon, Jim said. And, the Bergdorf location will exit the luxury retailer and reopen in the last half 2016 within a townhouse located at 10 West 56th Street. The space, formerly Elizabeth Taylor’s Manhattan residence, was hand selected by its owner, Mexico’s mega billionaire, Carlos Slim, as three of his family members frequent John Barrett. The 16,000 square foot space will offer a mix of both slow and fast beauty services and will staff aestheticians for spa services.

A new salon is also slated for downtown Dallas as part of a partnership with luxury boutique, Forty Five Ten.

And, the deal with Saks Fifth Avenue will place John Barrett salons in more than 15 locations in the US and Canada over the next two years. The specialty retailer had been looking for a big name to take over their existing salons, Jim said.

“I cold called Marigay McKee [the former President of Saks] a year ago about opening up in Saks stores…and she said that as a salon in the penthouse of Bergdorf Goodman she had never thought John Barrett would be available and that she was considering one of two players at that very moment and it was down to the wire. I asked her for three weeks to pitch the business. She said OK. We won it.”

John Barrett will be taking over nine existing Saks salons and spas over the course of 18 months and will add six new salons in their best stores, including the new Houston Galleria store and the new Miami Brickell City Center. Manhattan’s flagship store will receive a John Barrett in the last half of 2016.

And of course to staff all of the new locations will be the very important opening and establishment of the John Barrett Training Academy, which will be housed within the Manhattan townhouse and overseen by Kimberly Borger.

Currently, the firm is working on a new hair care collection to launch in 2016 with 20 sku’s, with seven to eight hero products touting ingredient stories.

The final piece of growing the brand is e-commerce. The firm is working on an e-commerce platform that “will offer a superior edit of luxury beauty products. We believe there is a lot of white space in luxury salon and everything that touches hair. There are very few places that have a selective edit of luxury beauty,” Jim said.