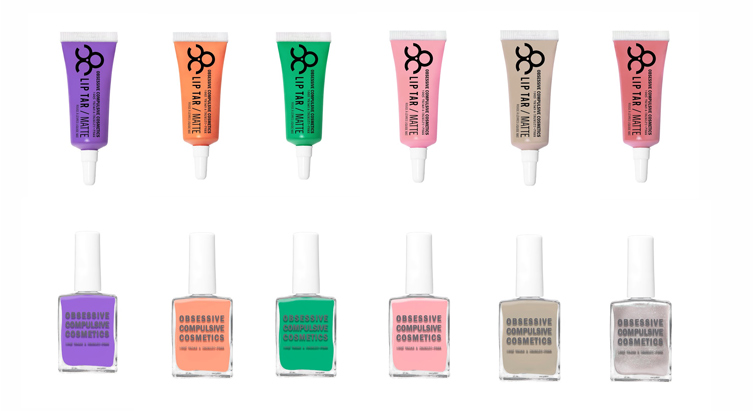 To celebrate its spring/summer 2015 line up, Obsessive Compulsive Cosmetics gathered a group of beauty influencers inside its Lower East Side flagship boutique one hour before the collection was officially released to the public. Near the entrance hung an oversized image of drag star Willam Belli wearing a teal-toned lip color with his hands held closely to his face to showcase matching painted nails. The green hue on the campaign imagery is called Cosplay, which also happens to be the name of a new color collection consisting of six matte lip tar shades and complementary nail lacquers.

The concept of matching nails and lips has traditionally been seen as old-fashioned, but is now becoming one of the hottest trends thanks to looks seen this year in social media and high fashion.

“The line was developed after seeing all of the selfies people post on Instagram showing their matching beauty color combos, as well as the coordinative nail and lipstick trend seen on the runways during New York Fashion Week,” said OCC Founder, David Klasfeld.

As for the name Cosplay, inspiration came from the role makeup plays in allowing individuals to transform themselves into fictional characters, explained David. “Makeup allows us to put on a costume and become our own superhero,” he said.

For those who want a bold look, vibrant matching lip and nail shades such as Belladonna, a bright ultra violet hue and Cha Cha, a pale tangerine, are available in addition to the namesake color, Cosplay. For those less daring, there is Femme, a baby pink, as well as Memento, a mid-tone pink/plum lip tar paired with Silence, a greyed beige shimmer nail polish – the only non-matching set in the line. Finally, John Doe, a pale ash-toned taupe rounds out the line with the perfect shade for achieving the latest nude lip trend. “People will go wild for John Doe since it’s a neutral shade, especially those who are timid,” said David.

The lip tars retail for $18 each, nail lacquers $10 each and the matching lip and nail duo sets are $25 at occmakeup.com and Beautylish.com. The collection is slated to go live on LordAndTaylor.com, Nordstrom.com, and Beauty.com later this summer.

CEW’s Beauty Creators Awards are Friday, November 11, and everyone who comes will ...

It’s only several weeks into 2023 and already the industry is buzzing about ...
Scroll Up