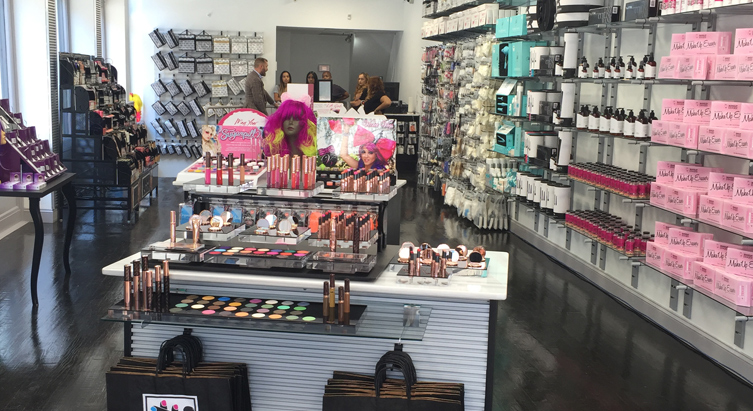 For more than 25 years Ricky’s NYC, the New York-based beauty retailer, has slowly, yet steadily, built a presence among cosmetic lovers and those who seek out the extraordinary beauty brand. Launched in 1989, the company presently operates 27 stores – 25 in New York, two in Florida. On August 15, Ricky’s NYC opened a new concept boutique in Soho at 489 Bond Street and Broadway called #.

Inspired by the prevalent social media companies found on Instagram, the curated offering of 75-plus sought after beauty brands includes indie-turned-in-demand products, up and coming labels with limited distribution, exclusives, and tried and true favorites. While some products have millions of followers, others only have a few thousand.

Created by Richard Parrott, the company’s President, the idea came to him while traveling on West 4th Street. “I realized how much success we have had with Instagram and I really liked the idea of having a smaller, more intimate, educational place where you can see the brands highlighted in a space where they wouldn’t get lost.”

However, only certain brands are invited to participate. “There is a criteria to be considered,” Richard said. “How powerful are they on Instagram? Are they influential? Do they have real engagement? Have they done something that’s been meaningful in the world of beauty or cosmetics?”

The store also offers shoppers a hands-on experience that encourages testing products before purchasing them, streaming YouTube tutorials from an on-site touchscreen, makeovers and special appearances by famous makeup artists – think Angel Merino, creator of Artist Couture – an Instagram-inspired selfie frame complete with props, and a bulletin board filled with client Polaroids taken in-store. Earlier this month, Gerard Cosmetics sponsored a beauty blogger event where fans got to meet four internet idols. “The turnout was massive. We had security at each door,” said Richard. “The sales that day were incredible. Fans lined up around the corner.”

The # store seems to be appealing to a younger consumer, too. “The Ricky’s shopper has everything for everybody. You go in for one item and come out with 10. This store is about beauty and cosmetic creations that are specifically successful thanks to the internet and Instagram,” he said. “Our main consumers are 13 to 28-year-olds. They’re the most passionate about makeup, they’re the most savvy, they treat makeup artists like gods, they’re passionate about looking good and wanting to express themselves through beauty.”

In only six weeks the store is already turning a profit, Richard said. “Social media has brought in new customers like nothing else. It’s the most powerful, organic mechanism out there,” he said. “It lends credibility to brands, which have been vetted by real people over and over. From an advertising perspective, it does light years more than what a print ad could do for something.”

Like many, Richard attributes social media as the catalyst for an ever-changing arena. “It takes a long time to make a statement. It’s taken Ricky’s 25 years to get to where it is today, where everyone knows what it is and likes the environment,” he said. “This store has only been open for a month and it doesn’t say Ricky’s in here and to start a new branding store that nobody knows about and to be this successful this quickly is really impressive.”