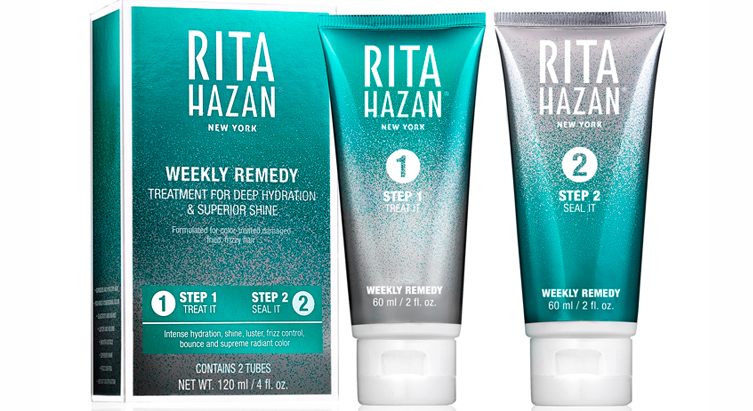 Hair colorist and salon owner, Rita Hazan, is launching her fourth product, this time addressing a transformative hair treatment that can be done at home.

Rita Hazan Weekly Remedy, which has a soft launch to Ulta stores and ritahazan.com in October, aims to provide consumers with a DIY hair treatment for a fraction of the price of what’s offered at salons—including her own. The item officially launches in March and will look for further distribtuion at that time.

“With all of the torture we put our hair through—coloring, blow drying, flat ironing—we needed to come out with something that would make her hair look good, and not with something heavy,” Rita said from her eponymous midtown salon.

Rita described the chemist involved with Weekly Remedy as a “genius tech” who formulated a two-step system that will replace the traditional conditioning step. The first step, Treat It, opens the cuticle to allow the formula’s active ingredients to penetrate—moringa seed, jojoba, mirabelle plum oil, olive oil, rice proteins from the monocot plant, as well as UV protectors. The second step, Seal It, closes the cuticle, trapping all of the ingredients inside the cuticle.

“This is not a mask, it’s not a conditioner. It is a cosmetic treatment in every sense, and it’s easy,” Rita said, explaining that each step doesn’t require several minutes of leave-on time; simply apply and wash after shampooing instead of conditioning.

Weekly Remedy leaves hair smooth, shiny and healthy without weighing it down, Rita said, and can be used as often as twice a week, depending on hair needs. Weekly Remedy joins Rita’s highly successful line of hair care products, including Root Concealer, a spray-on root touch up, and Ultimate Shine, a foaming gloss. Weekly Remedy will sell for $42 and lasts for about 6-8 applications.