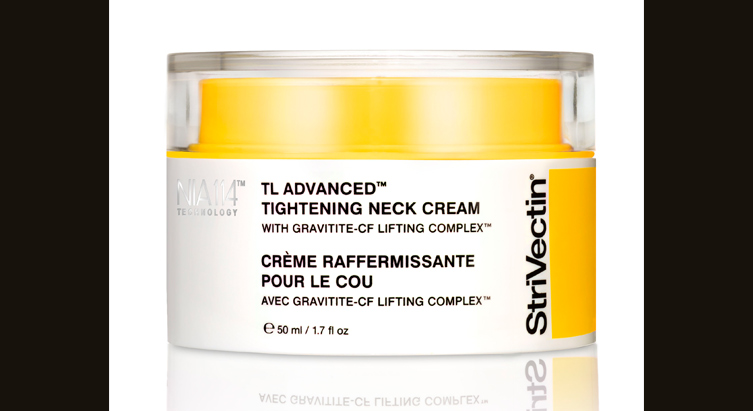 At StriVectin’s launch event to celebrate its new TL Advanced Tightening Neck Cream, the product’s concept of defying gravity came to life in a surreal experience as attendees dined on hors d’oeuvres served on platters suspended from the ceiling, while mini donuts featuring the packaging’s signature yellow color were positioned against the surface of a wall to create the illusion that they were floating in space.

The whimsical event was held high above New York City on the 21st floor of The Glass Houses, and took the new product’s campaign theme one step further with a performance by Tony Award winner Idina Menzel, who sang her signature song,“Defying Gravity,” from the musical Wicked against the backdrop of the Hudson River. The singer noted that she was honored that StriVectin was inspired to launch their new TL Advanced Tightening Neck Cream campaign around the theme of the song.

The advanced tightening neck cream is designed to be an upgrade from the original TL Tightening Neck Cream which was introduced in August 2011, and became the top-selling neck cream within prestige beauty through March 2014 according to The NPD Group, Inc.

“We are known for pioneering the neck cream category with the number one selling neck cream in America and we challenged ourselves to achieve even more dramatic results with a new formula and the latest lifting technology,” said JuE Wong, CEO of StriVectin.

The upgraded version offers more effective results than the original, the company said, and aims to counteract the inevitable effects of gravity and the natural aging process without a visit to the dermatologist’s office. It features Strivectin’s latest advancement in firming and sculpting technology by combining the company’s proprietary NIA-114 technology with a new Gravitite-CF Lifting Complex with the goal of tightening, firming and lifting the neck, profile and décolletage areas for “instant and long-term results.”

In eight-week independent clinical trials, 100% of users said their skin felt smoother and hydrated, 96% believed their skin felt tighter and 93% said that the results kept getting better each week. About 86% of panelists agreed the new product is the best neck cream they’ve ever tried.

StriVectin TL Advanced™ Tightening Neck Cream retails at department and specialty retailers nationwide, and at strivectin.com. It sells for $95.00 for a 50 ml / 1.7 oz.

The role of beauty editors has shifted as influencers have become a go-to ...