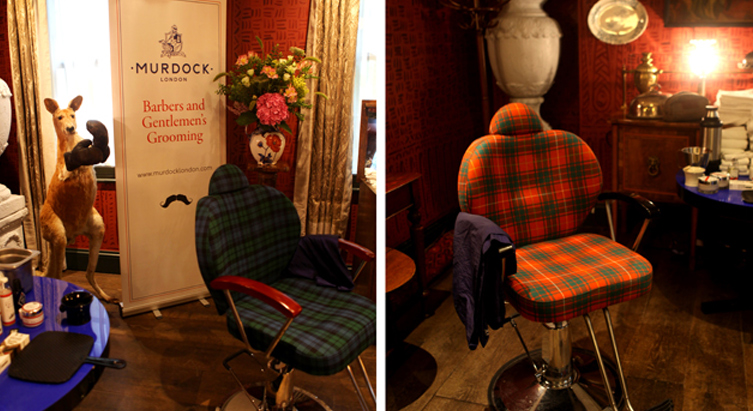 Travel with Wendy: Men’s Grooming Gets the Treatment in East London
On a recent trip to London, Wendy Liebmann, Founder and Chief Executive Officer of WSL Strategic Retail, saw some trends emerging in the men’s grooming arena, particularly in East London. Here, the lowdown on three barbershops Wendy said are catering to men in a new, more authentic manner.

On a recent trip to London, Wendy Liebmann, Founder and Chief Executive Officer of WSL Strategic Retail, saw some trends emerging in the men’s grooming arena, particularly in East London. Here, the lowdown on three barbershops Wendy said are catering to men in a new, more authentic manner.

“There are some emerging areas in the Shoreditch area, an inner city district and typically blue-collar region in the East End of London, that remind me of Brooklyn back in the day. Men’s grooming, which has been relatively quiet, has gotten quite a boost here, especially among the bearded set. And the barbershops I saw have taken on a whole new life becoming a reflection of the community and a place for men to gather and be social. This is beyond the metrosexual grooming routine, this seemed authentic and was less about beauty companies pushing beauty products but men being comfortable in their own space.

“Some time ago men’s grooming places had more of ‘men’s zone’ theme, with flat screen TVs, alcohol and cigars, and any minute a hot babe would appear from behind a curtain to give a back rub. Today’s barbershop feels more like an organized hangout. I visited Barber & Parlour on Redchurch Street in East London, which combines men’s and women’s services, in Neville Barber and Cheeky Barber, respectively, as well as a hair salon, in Cheeky Hair, throughout the large space. Neville Barber, the men’s area, felt like a more traditional men’s barbershop with checkered tile floors, wooden tables and fixtures, and copper lighting. There’s a sitting area where you can have coffee, cold pressed juice and a snack, with the whole place giving off a modern men’s-retreat vibe. The fellow who’s involved in it is also involved in SoHo House. The whole place has a very contemporary feel, even though the look is nostalgic. There are cuts and shaves and facials and manicures and pedicures. It’s more of a total experience. It made me think about how the US doesn’t do a total service shop for women, let alone for men.

“The other barbershop I visited was Murdock London in East London. This space felt a little more contemporary, but still there was a Victorian vibe going on. The space offers the total grooming experience, from haircuts to shaves to beard reshaping, including manicures, facials and a shoeshine. There’s also a retail area with quite extensive offerings under the Murdock London brand, including fragrance and body products, grooming tools and accessories. It’d be very enticing for a broad group of men who want to take care of themselves. It certainly felt geared towards the millennial, although older people would feel comfortable here, too. The other thing at Murdock London is that one can drink and hang out amongst the taxidermy on the walls, which is amusing. There’s not a flat screen to be seen. It’s a much more social environment and less about the babe. Ulta and Sephora miss that social type of thing. You don’t get that ‘come in and hang’ vibe that’s so interesting. It turns out the first Murdock London was established in Shoreditch; additional locations are in Chelsea, Covent Garden and Hackett Spitalfields.

“I also happened by Hurwundeki, a good place for a fast and furious, inexpensive cut. The ‘quick, stylish, inexpensive’ concept was founded by Ki Lee; it’s like Supercuts (it’s unisex), but trendy. Appointments are made by time spent at the salon, a 15-minute cut doesn’t require an appointment, a 30-minute service does. Again, the taxidermy motif was on display (is this a thing?), and the space was light on design overall. There was a Korean café serving lunch and dinner, everything from mandu to bibimbap to jeon.

“Not only was it nice to see a rise in men’s grooming spots (there’s also a men’s-only space in the Aveda location in Covet Garden), but to also see a range of good/better/best options for male (and female) consumers. In the US we have the Art of Shaving or Paul Allen, options that don’t feel relevant to a broader audience.