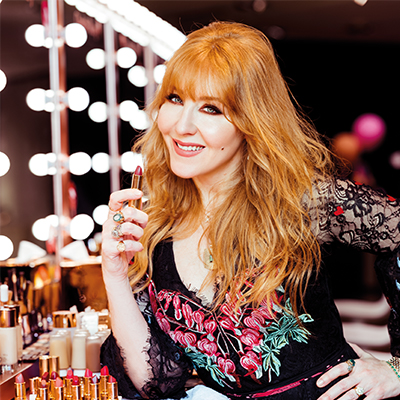 Founder, Chairman, President and Chief Creative Officer of Charlotte Tilbury Beauty, Charlotte Tilbury, is an iconic British female entrepreneur and one of the most highly regarded and influential makeup artists of all time.

Throughout her 27-year career, Charlotte has distinguished herself as a creative visionary and a true trailblazer. As one of the most in-demand beauty professionals, her impact on fashion and beauty has been significant and lasting. She has forever changed the face of the global beauty industry by decoding her expertise into transformative makeup tricks, tips and tools that are easy for everyone to use. Responsible for the creation of countless iconic beauty styles and trends, Charlotte invites everyone at every age to play, discover and experiment with makeup. Since establishing her record-breaking, award-winning, best-selling brand, Charlotte Tilbury Beauty, back in 2013, she has been on a mission to empower men and women to look and feel like the most beautiful versions of themselves – believing that with the right makeup everyone can conquer the world!

The makeup artist-turned-entrepreneur began her career in the ’90s supermodel era and has created over 180 cover looks and over 600 editorial and advertising campaigns for the world’s biggest fashion magazines, including American, British, French, Spanish, Italian and Brazilian Vogue, LOVE magazine, Vanity Fair and V magazine. She has worked on over 100 Vogue covers and is the only makeup artist to have had three simultaneous Vogue covers for the American, British and French editions of the coveted September issues n 2011. Having worked up to 40 fashion shows a season, Charlotte has started trends on the runways of New York, Milan, Paris and London, acting as show makeup director for brands such as Prada, Miu Miu, McQueen, Cavalli, Lanvin and Chloé among many others. Charlotte has also led beauty campaigns for the biggest luxury fashion houses and collaborated with the industry’s most highly regarded photographers.

Believing that makeup is everyone’s secret weapon, and that it should therefore be accessible to everyone, everywhere, in 2012 Charlotte launched her YouTube channel and blog, offering makeup tutorials and industry tips to a worldwide audience. Her tutorial on how to create the perfect feline flick, which has since become her trademark style, has been viewed 5 million times, and Amal Clooney’s wedding makeup tutorial has been viewed over 2 million times, showing the staggering reach of Charlotte’s global audience. Charlotte’s Instagram handle @ctilburymakeup has amassed over 3 million followers and acts as a key channel of communication between Charlotte and her fans, with Charlotte even calling on their input and feedback in relation to new launches, including crowdsourcing names for new products.

Charlotte is passionate about sharing industry secrets from the traditionally closed-door VIP world, and giving everybody access to the beauty knowledge, tips and tricks that she has acquired over her two decades of working in the industry, and that the world’s biggest actresses and models experience every time they sit in Charlotte’s coveted makeup chair.

Having helped create products for other brands for over 15 years, Charlotte wanted to decodify all the myths and transform the beauty industry by sharing her expertise with the world through her own namesake skincare and makeup range.

In September 2013, Charlotte’s makeup revolution began. Launching with a 200-strong product line, Charlotte Tilbury Beauty offered an innovative range of skincare and makeup products, suitable for all skin tones, shades and types. Through working with the best laboratories in the world, sourcing the best ingredients and creating the best formulas, the range was an instant international hit amongst fans, beauty editors, bloggers and celebrities, receiving unprecedented rave reviews and quickly becoming one of Selfridges’ most popular makeup counters. Only two months after the launch, Grazia Magazine Beauty Awards recognized Charlotte Tilbury Beauty as the Breakthrough Brand of 2013.

Since the official launch of Charlotte Tilbury Beauty, both the brand and Charlotte herself have won over 260 awards. In 2018, Charlotte was awarded an MBE in The Queen’s Birthday Honours List, for services to the beauty and cosmetics industry. The honours system, which recognizes the achievements of people in public life and their commitment to serving and helping Britain are decided by an honours committee and are awarded in the name of the Queen with approval from the Prime Minister’s office.

Charlotte is a Global Ambassador for Women for Women International, a non-profit humanitarian organization that provides practical and moral support to female conflict survivors. She has been a passionate supporter since 2014, helping to raise funds and increase the profile of the charity on a global basis, recently pledging £1 million to support their ongoing efforts. She is also a spokesperson for Creative Entrepreneurs UK, helping to mentor the next generation of entrepreneurs.

Today, Charlotte is known as one of the UK’s most famous makeup industry exports around the world and continues to push boundaries with her award-winning, record-breaking eponymous makeup and skincare brand.