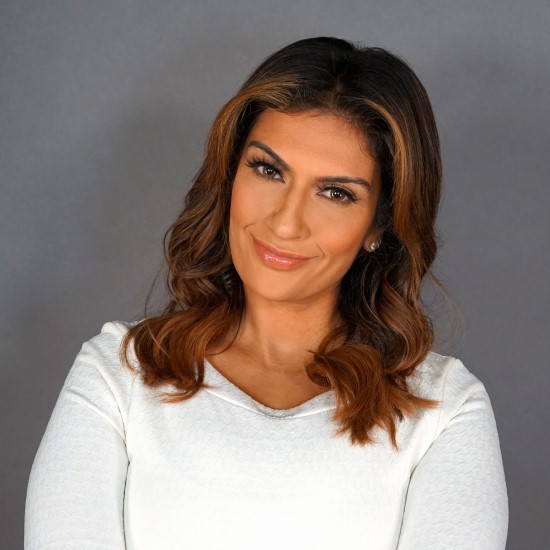 Hena is a host for Cheddar News. She anchors “Cheddar Climate – the Fight for Change,” “Search for a Cure – Covid 19,” and the “News Wrap.” She joined Cheddar in January of 2019 after working as a National Correspondent for CBS News in New York. There she anchored a segment called “The National Desk with Hena Doba” that aired on 100+ CBS stations across the country every morning. “The National Desk” is live and original reporting on the nation’s trending stories. Hena also reports live from the floor of the New York Stock Exchange focusing on consumer, business and economic stories making headlines. A versatile TV Journalist bringing over 15 years of expertise in public speaking, advertising, digital marketing, public and media relations. Excellent writer who communicates effectively with target audience and viewership. Ability to strategize innovative pitches for TV, radio and print media outlets. Incredible drive and energy who thrives in a fast paced environment.

Hena came to CBS after being the 11pm Anchor/Reporter at WFSB in Hartford, CT. She started her career as a one man band reporter at WWTI-TV, in Watertown, NY. She then moved down South and worked as a reporter at WTOC-TV, in Savannah, GA. In October 2005, Hena joined WFSB-TV’s Eyewitness News team as a general assignment reporter and became weekend anchor in October of 2008, making her one of the first Pakistani anchors in the U.S. During her television career, Hena has simultaneously taught journalism as an Adjunct Professor at Capital Community College and the Connecticut School of Broadcasting. Hena’s won several awards including an Associated Press award for Best Spot News, Best Breaking News and Best Sports Feature. In 2009 and 2010, she was voted Best Reporter by the readers of Hartford Magazine.

Born and raised in Queens, N.Y., Hena graduated from the University at Buffalo, where she earned two bachelor’s degrees in English and Psychology and was Feature Editor of the school paper, “The Spectrum.”