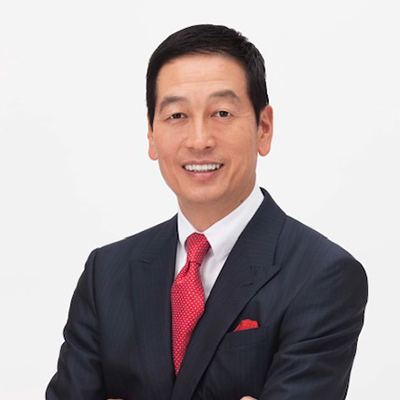 Masahiko Uotani is President and Group CEO of Shiseido, a Japan-based
beauty company founded in 1872.
Mr. Uotani joined Shiseido in April, 2014 as the first Shiseido president
appointed from outside of the company in its 140-year history. This
decision reflected the board’s sense of urgency and determination to
transform Shiseido. Mr. Uotani defined his mission as rejuvenating
Shiseido so that the company becomes a major global player, building on
the Japanese heritage it has cultivated for many years.
Shiseido currently employs 46,000 people around the world, operates in
120 countries and has sales of 1 trillion yen from multiple prestige brands
such as SHISEIDO, clé de peau BEAUTÉ, NARS, bareMinerals, and
Dolce&Gabbana fragrance.

Prior to joining Shiseido, Mr. Uotani had more than 30 years in marketing
and management at both Japanese and global FMCG companies. Among
his various posts, he spent 18 years as CMO and CEO at Coca-Cola in
Japan. With this experience he developed the “hybrid model” leadership
capacity leveraging both Japanese and global strengths.
Mr. Uotani also serves in other roles, including President of Japan
Cosmetic Industry Association, director of Japan Business
Federation, director of Japan Marketing Association and board member of
Columbia Business School Japan Alumni Club.
Mr. Uotani earned a bachelor’s degree in 1977 from Doshisha University in
Kyoto and a Master of Business Administration degree in 1983 from
Columbia Business School in NYC. He has a wife and two daughters (as well as two dogs who are important
family members.)