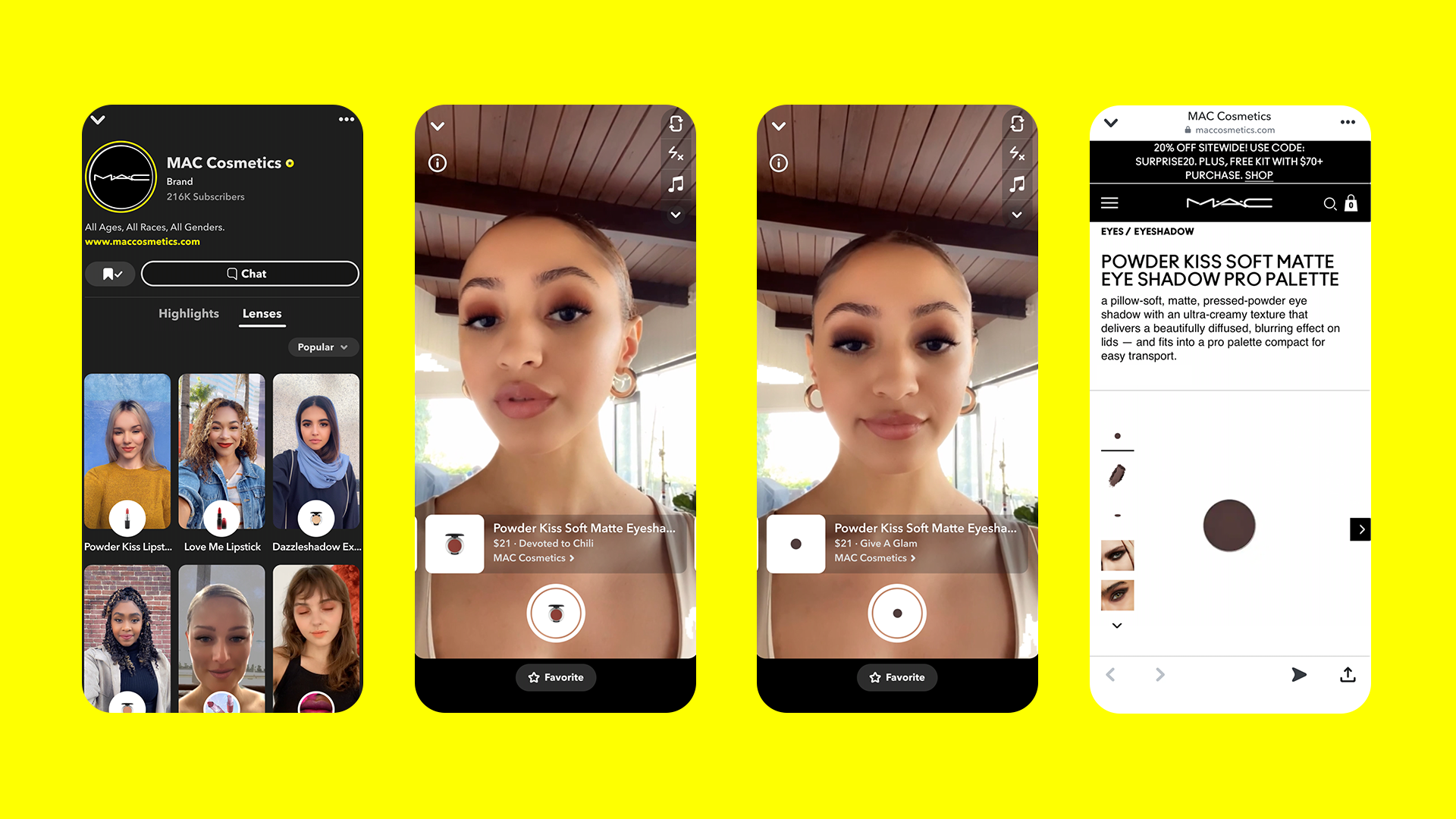 On May 20, Snap Inc. hosted its third annual Snap Partner Summit, unveiling the company’s latest innovations, ranging from a multitude of new e-commerce capabilities to augmented reality technologies. The company even unveiled a new inclusive camera designed to best capture darker skin tones, which will be available in Camera Kit, so developers all over the world can easily make their cameras more inclusive.

Snapchat reaches over 500 million monthly active users, who open the app an average of 30 times a day. In the U.S., nearly one of every two smartphone users has the app and roughly 40 percent of its community is located outside of North America and Europe. Its growth in India has also been substantial, increasing over 100 percent year-over-year in each of the last five quarters.

Dynamic Shopping Lenses
The big news for brands is the release of AR Shopping platform tools. Snapchat Lenses now allow businesses to offer users real-time product and pricing updates, in addition to augmented reality  try-ons, and the ability to make purchases without leaving the Snapchat app. Through Snap’s partnership with Perfect Corp, The Estée Lauder Companies’ M·A·C Cosmetics will be among the first to leverage the technology, offering 4 different Lenses to virtually try on and purchase 20 different lip and eye products. Over the next few months, hundreds of products and colors from M·A·C’s Profile will be added.

“Our new AR Shopping analytics offer insights on Lens performance and how people are using your virtual products. So, brands like M·A·C Cosmetics can learn which items, colors, and styles their customers are most interested in, making it easy to gather fast, early signals to inform marketing and targeting decisions, and even upcoming product developments,” said Carolina Arguelles Navas, Global Product Lead in Augmented Reality, Snap Inc.

AR Shopping
With over 200 million Snapchatters engaging with AR daily, Snap has also enhanced its virtual shopping and try-on experiences with voice-enabled commands and gesture-enabled controls. A user, for example, can use their hand to signal the camera when they want to see how an item physically looks on their body through AR, or they can search by saying what they are looking for as if chatting with a stylist. Additionally, ‘True Size’ technology has been added to enable accurate sizing for eyewear and sunglass; 3D Body Mesh and Cloth Simulation will allow users to experiment with full apparel outfits; and AR try-on is now being offered for watches and jewelry via the app’s wrist-tracking technology.

Every month, more than 170 million Snapchatters use Scan, a discovery feature that can be used to detect and identify objects (think: scanning a dog to find out the breed). Based on its success, Scan is now being added to Snapchat’s home camera screen along with a new feature, Screenshop, which gives users the ability to scan a friend’s outfit IRL or saved photos to shop similar looks with recommendations from hundreds of brands.

Features for Content Creators
On the Creators side, a bevy of tools have been introduced to help Creators grow their audience and build their businesses, including a new standalone app, Story Studio, featuring powerful editing tools to create professional content on mobile. For those who prefer to create videos using desktop apps, Snap will now enable them to upload content through Chrome or Safari. Additionally, Creators can upload videos into a web destination for Snapchat’s Spotlight platform, and anyone, even without a Snapchat account, can view the content.

“Spotlight is rolling out globally, and already reaches over 125 million monthly active users, and our community loves what they’re seeing. The number of viewers watching Spotlight for at least 10 minutes per day grew by over 70 percent from January to March,” said Reesha Sodha, Product Marketing, Creator Platform, Snap Inc. “Snapchatters are continually rewarded for their creations, and anyone can earn from the millions per month we offer to those who make top videos. Since we launched in November, over 5,400 creators have collectively earned more than $130 million dollars.”

Snapchat is also working with some Creators on their own shows. Beauty mogul Nikita Dragun’s hit show “Nikita Unfiltered” aired in March, and has logged over 30 million views, while influencer’s Loren Gray’s new series “Honestly Loren” premieres next month, giving her fans an introspective look at what it means to be an influencer.

Later this year, official Snap Stars  will be able to receive “tips” from subscribers, who can purchase Gifts via Snapchat Tokens and send Gifts through Story Replies.. The Creators will earn a share of the revenue from Gifts, though it’s unspecified how much.

Business Announcements
On the corporate responsibility side, Snap announced a multi-year partnership with Re:wild to help aid in restoring the biodiversity of southern California’s parks, which have been devastated by wildfires. The initiative will be complimented with an in-app educational awareness campaign that includes both original content and AR experiences.

The final big initiative revealed was the company’s new Spectacles, which incorporate AR directly into the wearer’s experience. While Spectacles are not being made available to consumers yet, it gives us a glimpse on what’s next on the horizon for the company as it expands into a whole new dimension of wearable AR.