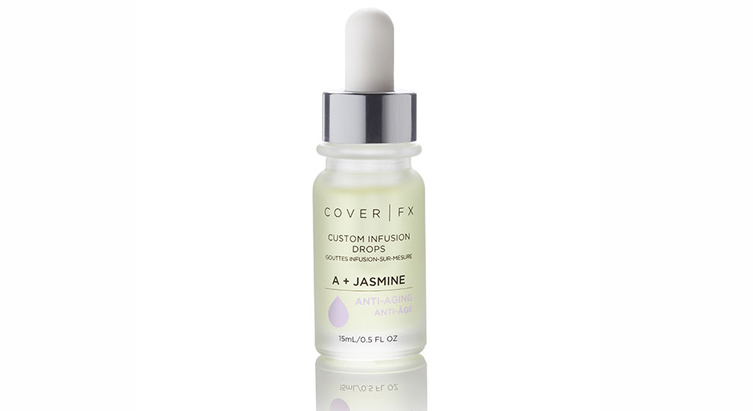 Cover FX: Do Drop In
Continuing with their highly adaptable line, the company just released Custom Infusion Drops, serum-like drops with a concentrated boost of essential oils and vitamins.

If you’re going to make beauty products, you might as well make them user friendly. And perhaps no one is more versatile than Cover FX. Headquartered in Toronto, the small company was originally developed to treat burn victims and those suffering from skin issues. Sold only in dermatologist’s offices, the company quickly became known as the skin problem solver. All that changed in 2000 when Lee Graff, the company’s Co-founder and a corrective makeup specialist, connected with Victor Casale, then founding partner, chemist and Managing Director at MAC Cosmetics. Impressed with Lee’s vision, he offered resources to help develop a complete line of full coverage foundations.

Fast-forward 15 years and Cover FX is having their biggest, most successful year to date. In March the company, owned by a private equity firm Catterton, which also owns StriVectin, released 25 shades of Custom Cover Drops, $44. The revolutionary formula not only plays well and mixes with any – and they mean any – product you own, but it allows you to control the amount of coverage and pigmentation.

“The Monday-Thursday girls want tinted moisturizer without having to lose the moisturizer that took them 10 years to find, while the Saturday night girls want to step it up, but they don’t want to buy five products to do that,” said Lauren Fontana, the brand’s New York territory manager. “By adding an extra drop of the Custom Cover into whatever their favorite product is, they don’t have to.”

The secret is Flash Fusion Technology, which gives the product the ability to blend and bond effortlessly with anything that is oil, water or silicone based. One drop gives you sheer coverage. Two? Medium coverage. Three? Full coverage. Four drops equals total coverage. As a bonus, whatever finish your serum, primer, moisturizer or anti-aging cream is, the foundation takes on that look, be it dewy, matt or light reflective. There are 15 additional shades are scheduled to be released in 2016.

Continuing with their highly adaptable line, the company just released four Custom Infusion Drops, $48. Following in the footsteps of their predecessors, these serum-like drops add a concentrated boost of essential oils and vitamins to whatever products you’re already using.

“You might love your moisturizer, but feel it isn’t hydrating you enough, or maybe you want radiance but also need something that offers a calming effect,” said Derek Selby, the brand’s Global Ambassador. “These drops, like Custom Cover, let you create whatever you feel your skin needs.”

Customers can choose from: A +, Jasmine, Anti-Aging: E + Chamomile, Calming; F + Neroli, Hydration; or C+ Lemongrass for Radiance. Because the ingredients are delicate and very reactive to the sun, the bottles were cleverly designed with a UV coating to keep the oils stabilized.

In 2003 Cover FX launched in Shoppers Drug Mart, Canada’s leading health, beauty and convenience retailer. Three years later they entered the UK in Harvey Nichols, House of Fraser, Space NK and Harrods At Urban Retreat. A year after that came the exclusive partnership with Sephora in the US. They can also be spotted at Joyce Beauty in Hong Kong, and most recently Sephora in Australia.

“The owners of the company invest in very unique brands that have a clear point of difference in the field,” explained Derek. “With the Custom Cover, our goal is to color match anyone.”

Cover FX works closely with their office in Houston, where the marketing, social media, sales and education reside, and with Sephora’s offices in San Francisco.  The company just launched print, digital and mobile ad campaign, which will run through the end of the year.

With so much versatility, the company can’t help but feel they offer something for everyone. “For the entry level consumer, the one who is anti-foundation, it offers the ability to keep it simple paired with an enormous amount of control,” said Derek. “For the beauty junky or makeup artist, it’s offering them the ability to be mixologists.”