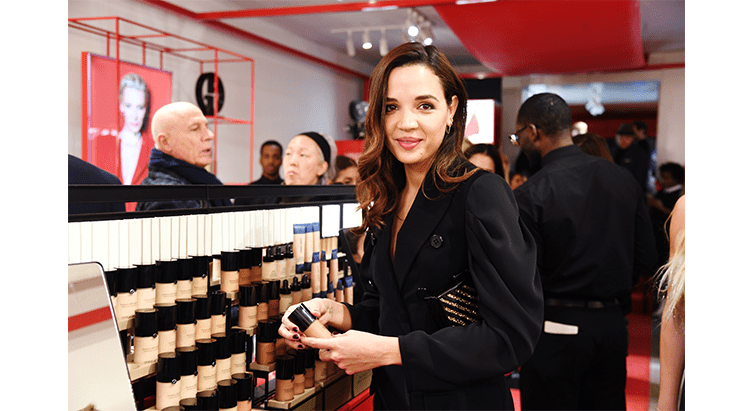 Armani’s L.A. Pop Up
A striking scarlet exterior, red carpeted floors and red lacquered cabinetry are all designed to convey Hollywood glam the brand is known for in its new pop-up, said Alyssa Navia, AVP of Marketing, Giorgio Armani Beauty & Skincare at L'Oréal.

Upon entry, visitors to the new Armani Box in Los Angeles are greeted by a giant golden gorilla, Urie, a replica of a black one in Giorgio Armani’s Milan home created by Italian artist Marcantonio Raimondi Malerba.

The 2,000-square-foot pop-up, which opened February 7 and is the first in Los Angeles, has other treasures too, including exclusive products and a VIP area. The pop-up runs until March 24.

“We wanted to tell the story of Armani beauty and movie stars,” said Navia. “Mr Armani has aligned himself for years with the red carpet and designed for iconic films. We translated that into all the products, and wanted to tie that into this experience.”

There were certainly enough film and TV stars present at the opening night party to bear that out; Dakota Fanning, Susan Kelechi Watson and Katherine Schwarzenegger were among guests who could try out pop-up exclusives such as the Power Fabric High Coverage Stretchable Concealer and Foundation Balm. Also on show was the brand’s new Armani Code Absolu fragrance, which available nationwide in March.

The space is designed with a playful spirit; interior touches include a vintage movie camera, star motifs and campaign imagery featuring Cate Blanchett and Ryan Reynolds, a vending machine gives shoppers access to samples. The ‘virtual fitting room’ allows customers to see what a shade of lipstick looks like without having to actually put it on. Navia said that the pop-up holds products for skin, lips, eyes and fragrances, with prices at $38 for lipsticks and $64 for foundations.

“With the brand’s ties to cinema and the awards, this is a great spot for us. I think there’s a different shopper specifically at pop-ups. There is something special about these spaces, where you feel like you’re immersed in a different world, and you get the whole idea of the brand.”