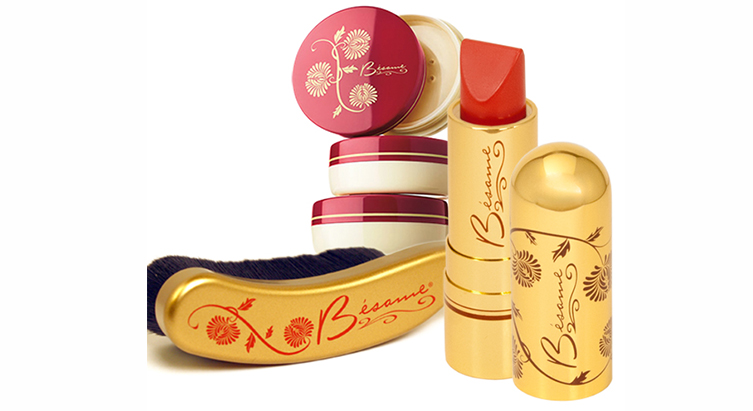 Deja New: Besame Cosmetics Moves from Niche to the Spotlight
“We attract customers who feel a little intimidated by the prestige counters. [Consumers] also tell us that they feel overwhelmed by too many choices, so before they found Besame, they just skipped makeup altogether.” — Gabriela Hernandez, Besame’s founder

Besame Cosmetics, the indie color brand created by Gabriela Hernandez in 2004, is defining what it means to be an industry sleeper. This tightly curated assortment of vintage-inspired color cosmetics, based in Los Angeles, has attracted a cult following since the brand’s founding 16 years ago. With a growing presence in Sephora, two brick-and-mortar stores on the east side of Los Angeles and a new footprint in Anthropologie, Gabriela anticipates her brand to generate $3.4 million in sales for 2016, and is planning to introduce several new products this quarter.

In 2011, Gabriela, who calls herself a “makeup detective,” authored a glossy coffee-table tome, Classic Beauty: The History of Makeup. Her philosophy is that less may be luxuriously more: she prefers cake mascara offered only in screen-siren black and bullet-chiseled lipsticks mostly in reds replicating shades worn from the 1920s through the 1970s. Gabriela eschews eyelash primers; she finds the effect garish. Ditto for nail colors, which she will not add to her line because of the toxicity of the chemicals required to getting desired shades (she recommends gentle buffing instead).

She is the majority owner of Besame, at 51 percent, with the balance held by her husband, Fergus. She said that they currently have no interest in engaging investors, although they are beginning to explore partnerships that could take the brand into European and Asian markets. Gabriela controls the formulation, compounding and pouring all products in Los Angeles, and designs the nostalgic packaging. Both processes are based upon actual vintage cosmetics, which she collects, analyzes and updates for modern formulation.

The first wave of Besame products appeared in quirky dress and gift shops. Then, an online foray with Sephora in July 2014 with a single SKU, Violet Brightening Powder, changed everything. The “Scouted by Sephora” team had repeatedly spotted the whimsical, six-sided, pansy-strewn carton and pastel tin used by entertainment industry makeup artists.

The Sephora connection spiked Besame’s sales to a reported $1.5 million in 2015. Gabriela told Beauty Insider, “Sephora did not realize that we already had leverage, in the form of our fan base. They didn’t know that we had been prepping the market for 10 years. All we needed was access—and so the Sephora team was surprised by what happened next.”

Scheduled for rollout in March 2016 in all Sephora US locations will be in-store displays platforming Besame’s color-correcting translucent loose face powders in Vanilla (for sallowness), Vanilla Rose (for greenish and blue tones) and Violet Brightening (for undereye circles). The line also includes Vanilla Chai for darker skin and French Vanilla for medium skin, both intended to balance red and pink notes in the complexion. For the perfect finish, Gabriela suggests the final step of sweeping the skin with her keepsake boudoir brush, which she adapted from an antique.

Gabriela calls the developing relationship with the cosmetics retailer “nurturing.”

“Sephora has been very accommodating to our production timeline, which is so important since we make everything ourselves and can’t just pull inventory out of a huge warehouse. Sephora calls us their jewel of a small brand, and they have guided us a little at a time.”

Initially, chemists and labs tried to discourage her vision. Gabriela reveals that when she approached Sephora a decade ago, she received a cool reception. “They didn’t get us then,” she said. “I was kind of an outcast, and did not get a lot of support from retailers.”

Buyers at Nordstrom expressed interest, but Gabriela said that the financial timing was not right. The brand briefly maintained a counter at the tony Henri Bendel location on 5th Avenue in Manhattan, an experience she described as “great for our image, but really brutal in terms of the margins.”

The company name, “Besame”, strikes a chord with Latinas—it means “kiss me” in Spanish—but the appeal now also resonates broadly with other consumers who may simply know the word from the 1940 song-title, “Besame Mucho.”

Although the Besame Girls represent as well-coiffed outliers, Gabriela, originally a graphic designer who came to cosmetic formulation through her interest in packaging, explained to Beauty Insider that a growing segment of her market is even further distanced from the mainstream.

While not exactly a tree-hugger, she is repelled by “waste, excess and disposable culture.” For instance, Besame’s face powders are free of parabens, sulfates or phthalates, and the brand’s fragrances, organized by decade, are sold in refillable atomizer-bottles. Fans not only re-use but collect and trade the brand’s tins.

Hernandez added that Besame is gently stepping away from its novelty vintage identity in 2016, which she finds limiting. “Our makeup is designed for the modern woman,” she said.

While keeping her brand closely aligned with her original concept—cosmetics with Old Hollywood glam, which might have found a place on her mother’s or grandmother’s vanity table—Gabriela conceded, with typical understatement, “2016 will be different for sure.”

Despite news of a pending recession, prestige beauty sales are showing healthy growth, ...

Carla Vernón has been named CEO of The Honest Company, a move that ...
Scroll Up