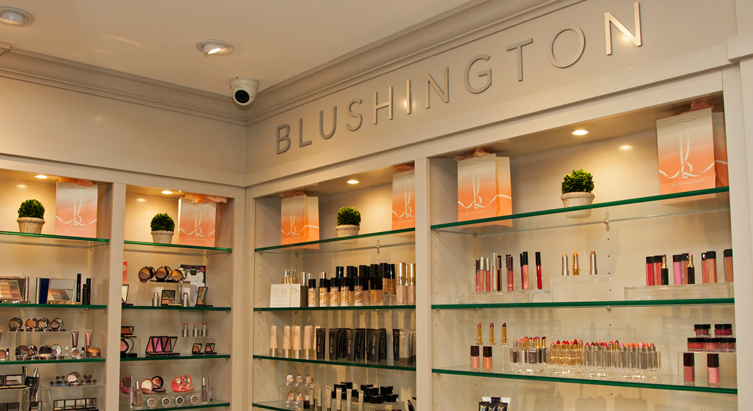 Filling the Make-Up-in-an-Instant Gap: Blushington Makeup & Beauty Lounge
The 1,200-square-foot space has 10 stations, including a lash station, and a number of makeup artists and aestheticians who are ready at 7 a.m. to cater to every woman’s facial needs.

If blow bars had their moment – and let’s be honest, they’re still having it— it seems a natural extension that makeup bars would now want some face time too…literally. Enter Blushington Makeup & Beauty Lounge, which opened its coral-colored doors in West Hollywood, California in 2011, and followed with two more units, one on its home turf in Newport Beach and another in Dallas, Texas. Last month the makeup, brow and beauty bar headed east. Their fourth store is in Manhattan’s Le Parker Meridien Hotel, where it shares floor space with the hotel’s impressive gym, Gravity; nail salon, tenoverten; and Blushington’s real estate counterpart, Drybar.

The idea for the one-stop-facial-shop came from Stephi Maron, who, at 21, realized when family members came to visit, there was nowhere to send them to get their makeup done. “It was my ‘aha’ moment,” said Stephi, now 26. With financial backing from her father and select board members; and visual, conceptual, and branding help from Drybar’s Alli Webb’s husband, Cameron, Blushington became a reality.

Stephi’s older sister, Nicki, who came on board as Chief Marketing Officer in 2013, acknowledged the cosmetic bar trend, noticing that other brick and mortar pop-up companies were following suit. “It’s a compliment,” she said. “It made me think, ‘Wow there must be a lot of room in the beauty space for people to be catching onto our concept.” She added that the women who come to their stores vary from heads of studios, to businesswomen, moms and girls going on auditions or dates. “We’ve learned that people don’t know how to put on makeup and that education is missing,” she said. “We come from a ‘less is more’ philosophy. We didn’t want to be like department stores that pressure you to buy product or want to sell the same look. Rather, makeup is size agnostic.”

Natasha Cornstein, the company’s President, who came on board this past January, is the team’s newest member. “Every Blushington is co-located with a Drybar, that’s our real estate strategy. And we have a 35%-40% conversion that goes back and forth between the two brands,” she shared. “We also found that 40% of web traffic was coming from New York and the surrounding areas, which was a huge force in opening a store here.When we heard a space was available in the hotel and that we’d be sharing it with Drybar it was the perfect location.” Recently, the privately-owned company decided to expand further. “In October we will be going out for another round of angel financing with the hope of raising more than $5 million, which would go towards a number of Blushingtons and to build our team.” Over the next three to five years the group anticipates opening 20 more stores, 10 are planned for the metropolitan area.

It was Marisa Zafran, Director of Public Relations & Marketing for The Jack Parker Corporation, who owns Le Parker Meridien Hotel, who capitalized on the fact that their racquetball courts were old school and that the underground space would be better utilized as a beauty hub. In 2012, Drybar, tenoverten and Blue Dog, maker of juices, shakes and smoothies, merged with Gravity and the newly created spa, Moonshine. “I thought Blushington was a great concept,” she said. “They were looking at coming to New York, they have a working relationship with Drybar…They were a natural fit for an underground space where special brands with their own signature come together.”

The 1,200-square-foot space has 10 stations, a lash seat, and a number of makeup artists and aestheticians, who are ready at 7:00 a.m. to cater to every woman’s facial needs. While mainly tending to the 20 to 50-year-olds, they believe in starting early, so their youngest clients are called Sweet Pea, those 12 and under. Aside from classes, Blushington offers lash and brow extensions, tinting, brow waxing and tweezing, home visits, and a variety of makeup looks ranging from $20 to $55. Categories such as Pure + Natural, Simply Glowing, Lucky Stars and Smoke + Mirrors offers office, evening, date-night and daytime looks. “Getting your makeup done has become an every day luxury,” Stephi added. “It’s like getting your hair done. We have recurring clients come in two, three, even four times a week.” They also work with a number of high-end, thoughtfully curated beauty brands: Stila, Jouer, Becca, Ilia, Eve Lom, Temptu, Julie Hewett and Kevyn Aucoin.

Later this year the company will open its fifth store, in California, followed by a launch of Blushington products.

“We are living in a camera-ready society where everyone wants to look their best,” said Natasha. Now they have Blushington to help them do that.