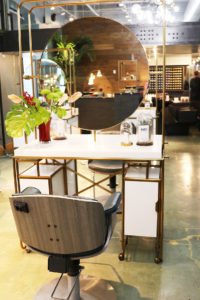 Celebrity colorist Joel Warren has opened a full-service salon at the Saks Fifth Avenue flagship store in Manhattan. The Salon Project by Joel Warren [TSP] opened its doors Wednesday, May 1, welcoming guests to its 1,500-square-foot boutique, located on the seventh floor.  The salon follows Joel’s successful TSP in Saks on Long Island at the Walt Whitman Shops. He also operates two locations in Florida, one at The 1 Hotel on Miami Beach and one within Saks at Town Center in Boca Raton. Described as an Apple store meets Sephora in a high-end salon setting, TSP offers a curated selection of products, including Oribe, R&Co., Select, Cannuka and Coco Canna Super Foods.  The salon boasts amenities including a digital check-in station, two barber stations and a private treatment room for high-tech face and body treatments. Joel was recently named as the global ambassador for Goldwell US; an open style Goldwell color bar is in the works, as well. The salon’s interior was styled by Joel, along with Bruce Teitelbaum from RPG, following an industrial-meets-Neo-Georgian theme featuring wood paneling and sumptuous leather chairs.